Welcome! This blog is still a good place to find tour dates and giveaways, but I hope you'll come hang out with me on Instagram (ELockhartBooks) or Twitter (ELockhart). That's where all the action is. xo E . P.S. Be a little kinder than you have to.
Close

May 17, Sat -- American and British readers are talking about We Were Liars on Twitter, Instagram and Tumblr. #liarsliveread. That's tomorrow! Follow the page number prompts below, or just join in. It begins 9 AM EST or 1 PM GMT and goes on till everyone falls over. xoE

More details and instructions here. You can use photos. 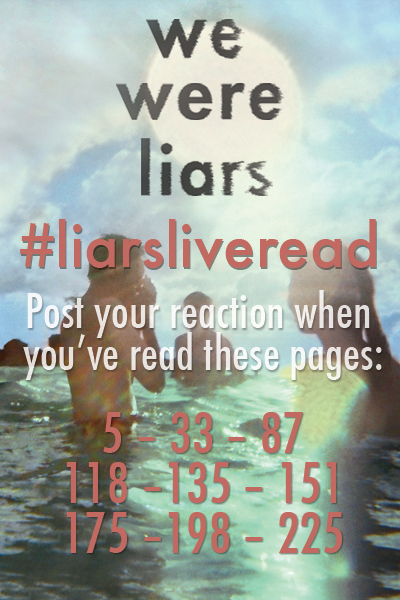 Where I'll be at the International Reading Association conference this weekend, below:

Signing at the Random House booth at 1:30 PM: not just We Were Liars (hardcover! before pub!) but also The Boyfriend List and two Jenkins books: Water in the Park, Toys Go Out.  (Not on the schedule! But I will be there.)

Then signing at the Anderson's Bookshop Naperville booth #2745: both We Were Liars and The Disreputable History of Frankie Landau-Banks.

Come out and say hello.

Posted at 05:58 AM in Appearances | Permalink

I have continued writing mottos on my hands, as Cadence and Gat do in We Were Liars. 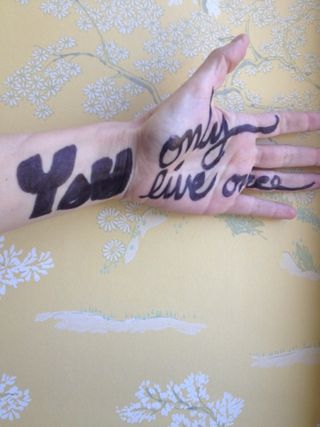 There's an interview with me about We Were Liars over at YA Interrobang.  And here's a review in The Horn Book to read.

The same info I've told you, but it bears repeating:

US Tour dates are here.   Come out and see me beginning May 13!  Write on your hands and show me. Bring your friends.  I am doing stuff with Lauren Myracle, Lauren Oliver, Sarah Mlynowski, Libba Bray, Robin Wasserman, Gayle Forman, Jennifer Smith, Susane Colasanti, Eliot Schrefer -- basically, an awesome crew.

May 14, 7pm EST  I hang out with Gayle Forman (whose If I Stay movie comes out this summer!)  talking and taking your questions in a video chat thing. Sign up here and you can also get signed books.

Here's the Australian cover for We Were Liars.  Out down under in August from Allen and Unwin.

And in other news, I have been writing on my hands.  The characters in We Were Liars do that a lot -- mainly mottos and phrases and ideas they like. Here are two.

What are your mottos?  I think you should write them on your hands, take a photo, and tag me on Twitter.  Just an idea.

We Were Liars is out in the USA on May 13 and in the UK on May 14.
US Tour dates are here.  NYC, Rochester, Rheinbeck, Washington DC, Book Expo, various places in MA and CT.  Come see me.  In New York, lots of fun events with other authors.

May 14, 7pm EST  the magic of the internet brings you me and Gayle Forman (whose If I Stay movie comes out this summer!)  talking and taking your questions in a video chat thing. Sign up here and you can also get signed books.

That's it for now.

Posted at 08:53 AM in Appearances, Book Publishing News, Liars | Permalink

I have been running about doing pre-publication tour stuff for We Were Liars. Here is a fun collection of photos from the Los Angeles Times Festival of Books, which includes loads of your favorite authors and a selfie of me and Rainbow Rowell, with picture book author Tad Hills totally photo-bombing us.

And here is an article I wrote for the LA Times to publish during the festival. It's about howI came to write for young adults from grad school in Victorian literature.  And they made a fun sketch of me. It's from an old PR photo though. My hair is shorter now. 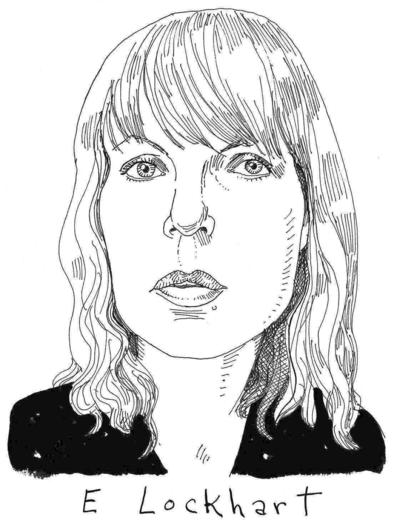 Look! You can make a pinword re-bloggable thingummy. The We Were Liars site now has an app — you put up a photo, add text, add a Beechwood Island filter and then it is super good-looking and you can blog and reblog and pin and Instagram it. Here is my first one: 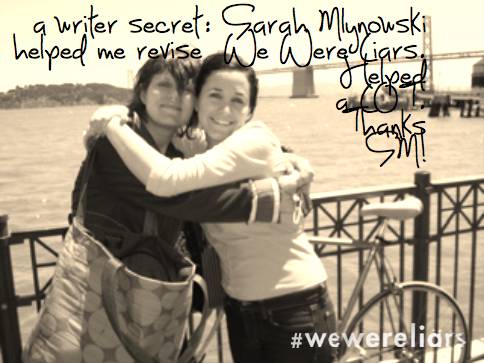 Ideas: confess your LIES, proclaim your TRUTHS, share your MOTTOS (there are a lot of mottos in the book), pull QUOTES you love, pose IMPORTANT LIFE QUESTIONS.

Go here to make them.

Pre-Order From Waterstones, Too!

UK folks, you can pre-order We Were Liars at Waterstones. Here is the sign outside their Arndale shop. 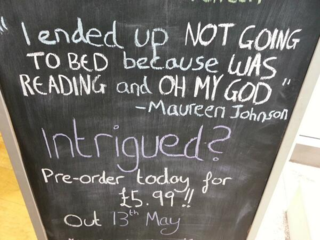 Interview about We Were Liars

Nice interview over on Debbi Michiko Florence's website about We Were Liars. And you can enter to win an advance copy!

Tumblr and Hamline and Seattle

Hello from a hotel room. I have been traveling a lot! I love room service! When I get home in a few days I have to start my next YA book. I am frightened.

Meanwhile, here is a little news!

Most of my events for We Were Liars (May 13) will be after it publishes, but Seattlites -- a sneak preview plus FUN and EMBARASSING hijinks with other writers.

Feb 27, 2014,  me, Robin Wasserman, Adele Griffin and Sarah Mlynowski will read from our new books and from early and embarassing first attempts at fiction. It's at the downtown Seattle Public Library, 6:30 pm. More details here!

The four of us are also doing two panels on Saturday the 29th at the AWP Conference,  also in Seattle, so if you're headed to that, come see us.

I just got back from spending 11 days teaching at Hamline University's MFA in Writing for Children, low-residency program. To put it simply, there are intensive residencies in July and January, and the rest of the time students write like crazy and send in work to their advisors for critique and guidance. The faculty is very thrilling to be around, for me.

This time, I taught writing workshop with Laura Ruby (Bad Apple, Good Girls, etc) and our guests included: Anita Silvey (who lectured on the history of picture books and middle grade novels),
Jane Yolen (who gave our commencement speech),
Kate DiCamillo (who talked about her process on The Tiger Rising with Jane Resh Thomas),
Geoff Herbach (who talked about his theories of primal emotions and how they drive stories) and
Vaunda Micheaux Nelson (who talked about her development process on No Crystal Stair).

Anyway, the Hamline MFAC now has a Tumblr, which is unofficial but supercalifragilistic. It is run by faculty member and NBA long-lister Anne Ursu, and if you have interest in children's and YA books generally, it's a good one to follow (it's not centered on Hamline stuff, but on stuff we talk about at Hamline, if that makes sense.) Here it is.

So not only do I recommend THAT Tumblr, but I want you to know I got ACTUAL TUMBLR lessons from Rachel Fershleiser, who works there and does all their cool book stuff -- and she explained it all to me!  Though I haven't figured out totally how to work it, I am getting much better and you should come and follow me because I will be there and on Twitter much more than on this blog.

Also, of course, the We Were Liars Tumblr is dead sexy (made by the folks at Random House) and it has pins and maps and all that juicy stuff connected to the book.