Little Willow asked me all kinds of fun questions about Dramarama and musical theater!

In celebration,
and since one of the (many) theatrical obsessions of Sadye and her friends is Broadway actress
Kristin Chenoweth
(and her very Kristin-ish-ness, how tiny and big and funny and fabulous she is)
I wanted to show you what it's all about.

To know her is to love her. The YouTube videos don't do her justice, but
here she is on the Today Show performing "Popular" -- the song Sadye sings in Dramarama.

And here's her Tony-winning performance as Sally in You're A Good Man, Charlie Brown. (You have to wait through an intro...)

Posted at 06:46 AM in Dramarama Stuff | Permalink

It's late at night and I have a few things to just talk about quickly, all unrelated to one another and in no order of importance (and some are more important than others!)

1) I just saw Legally Blonde on Broadway! Bend and snap! It made me want to wear very high heels. If you want to read books about Elle Woods, go visit Natalie Standiford.

2) They are trying to ban my friend Maureen's book. By "they" I mean the Bartlesville Board of Education in Oklahoma, and by "my friend Maureen's book" I mean The Bermudez Triangle by Maureen Johnson. Here is Maureen's smart and also hilarious blog on the topic. And here is the As If! (Authors Support Intellectual Freedom) post.
(How can you help? Go buy the book).

3) Dramarama is nominated for BBYA, which is best books for young adults.

4) Coe Booth won the LA Times book award for best young adult novel, for Tyrell! Yay Coe! It is a really great book and it made me laugh and cry.

Posted at 12:07 AM in AS IF! Authors Supporting Intellectual Freedom | Permalink

Tomorrow and Wednesday, come see me:

Posted at 07:32 AM in Appearances | Permalink

Posted at 06:39 AM in Dramarama Stuff | Permalink

In Dramarama, the kids are obsessed with the musical Cabaret.
Because it is unbelievably awesome, that's why.
And they talk on and on about it, and obsess over it, and sing it and listen to it.
So that's one thing.

Another thing is, I love Norbert Leo Butz, because I saw him on Broadway in his Tony-winning performance in Dirty Rotten Scoundrels, and he was so funny and disgusting I fell off my chair.

Now -- a joy jolt from YouTube, courtesy of Little Willow!

Enjoy.
And if you have something similarly musicaltheater-tastic to shoot me, stick it in the comments. They're actually open.

Lauren Barnholdt's new tween book, THE SECRET IDENTITY OF DEVON DELANEY, is about a girl named Devon who is a big LIAR.
While she was living with her grandmother for the summer, she told her "summer friend," Lexi, that she was really popular back home and dating Jared Bentley, only the most popular guy at school. Now, Lexi is standing at the front of Devon's class, having just moved to Devon's town.
Uh-oh.
Devon knows there's only one way to handle this -- she'll just have to become popular! But how is Devon supposed to accomplish that when she's never even talked to Jared, much less dated him?!

Barnholdt is the author of Reality Chick, about a girl who spends a season on a reality TV show -- and last time she stopped by this blog she made us a bad, bad, boyfriend list. (Not a bad list! A list of bad boyfriends!)
And she has a fun blog.

So, I asked Lauren to take the Dramarama Musical Theater Interview, and she did -- only to prove that she's fearless and funny. And a bad singer.

1. You were in a play in high school, weren't you? Tell me all about it.

This is almost too humiliating to talk about, but my school did The Wiz. And I tried out, even though I cannot sing even one note.

(Seriously, I can’t. One time I asked my mom if she would fly to Hollywood to see me if I ever got on American Idol and she was like, “Oh, honey, I don’t think we have to worry about that.”)

And I got the part of a Winkie, which is one of the bad witch’s slaves. And I was really, really happy because I got a part. I hadn’t realized that everyone who didn’t get real parts was cast as a Winkie. Sigh.


2. Give me song lyric that makes you laugh. Preferably from a show, but I'll cut you some slack if whatever you quote is funny.

Anything sounds funny if I’m singing it.

3. If you've seen a show on Broadway, what was your first one? Whom did you go with, who was the star, what did you think of it?

I never have. But I really, really want to. I make my boyfriend take me to lots of high school productions. We just saw Fame last week.

I don’t really have a showbiz fantasy, unless it involves Ben Affleck declaring his love for me. But I don’t think that’s what you mean.

I actually don’t really know any of those people. Like I know Julie Andrews because she was Mary Poppins, etc. And of course Barbra and Ethel and Nell and Carol Burnett. But I don’t know them well enough to say if I am any of them. I guess I’ll pick Kristin Chenoweth, since I know from reading DRAMARAMA that she’s really small and cute. I’ve always wanted to be really small and cute.

6. Write me a nice little song lyric for the book you're promoting right now. Please.

Sung to the tune of HIT ME ONE MORE TIME by Britney Spears.

“Oh baby, baby, how was I supposed to know?
That you would come to school here?
Oh, baby, baby, I shouldn’t have told you so…
That I was dating Jared…”

That’s lame, right? Now do you see why my mom isn’t worried about having to come to Idol?

Click here to order THE SECRET IDENTITY OF DEVON DELANEY.

Posted at 11:10 AM in Dramarama Stuff, Girlfriends Cyber Circuit | Permalink

Come Hear Me Read from Dramarama

For Dramarama, which comes out May 1, I'm appearing at the following places in the NYC area. I hope you'll all come out and see me.

Thursday, May 24th
Park Slope Barnes and Noble, Brooklyn 7th Avenue
reading with Melissa Kantor, author of
Confessions of a Not It Girl
If I Have a Wicked Stepmother, Where's My Prince?
and
The Breakup Bible (which I've read, and it's very funny.)

Posted at 09:45 AM in Appearances | Permalink

Oh, you dudes and dudettes who have entered the E. Lockhart Extravabasket Contest have made me SO HAPPY.
Seriously, there are some really amazingly funny and even touching song lyrics about my books over there. And I KNOW some of you are newsletter subscribers, because a whole lot more entries popped up shortly after I sent out the second-ever newsletter.

My subscribers are very excellent. (Newsletter subscription form at the right).

So the rest of you, what are you waiting for?
you can win an "extravabasket" of goodies OVER AT
Not Your Mother's Bookclub:

signed copies of lots of books,
audio books,
diva-esque treats from Sephora,
a CD I hand-made (well, with the help of the computer)
and more.

And thanks again to all of you who entered already.

This is where I was Tuesday night, although the guys at Gawker make it sound unfun and kind of like everyone had something to prove because we were full of unresolved high school issues.

And like, they didn't dance or flirt or anything. They just stood around and worried about whether it was geeky to be involved in YA literature. At least, that's what the Gawker piece makes it sound like they did.

Well.
I am not saying YA authors have all their high school issues RESOLVED or anything,
and I am not saying it is not at least a semi-geeky job to have.
But.
It was SO FUN.

That's me and my co-author on How to Be Bad, Sarah Mlynowski, in our prom finery. (You can click on the pictures and they'll get larger)

Ellen Wittlinger wore a pink wig is how fun it was.
And I danced around like a lunatic with authors of books such as Why I let My Hair Grow Out, Shug and Price of Admission.
And we took some silly pictures. And there was lots of candy. And there were balloons and sparkly things all around. And I got to wear a really adorable new dress.
Again. Fun.

This is David Levithan and Maryrose Wood.

All the money raised went to Advocates for Youth, and we promoted this fantabulous book into the bargain: 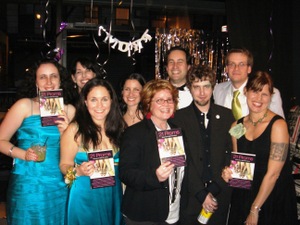 Naturally, of course, Mr. Green video-blogged the Prom. See Gordon Korman, David Levithan, Sarah M, Libba Bray (in a tux....kind of) and watch JG get down to both Prince and the Micki song.