This Fall, for the release of The Boy Book, I currently have no public appearances planned -- though there are some in the works.

However,
if you're a librarian, English teacher, bookseller, or something of that nature, I am hopping around to some conferences, in one guise or another.

SIBA (Southern Independent Booksellers Association)
The Southern Festival of Books in October
GLBA (Great Lakes Booksellers) in October
NCTE/ALAN in November, including a panel on Humor and the YA novel

To reach me for conferences or bookstore signings, that kind of thing, call Random House and ask for Kathleen Dunn, my estimable publicist.

Posted at 01:09 PM in Appearances | Permalink

Take this quiz at QuizGalaxy.com

You know, I have always identified with Axl! though for no reason I can think of. :)

Posted at 07:11 AM in Fun Stuff: Surveys, Quizzes and other Ridiculousness | Permalink | Comments (0)

Ooh, I was one of the top 6 Superman Haiku chosen in Bookshelves of Doom's contest!

If you like fantasy/chick lit, on the order of Rhymes with Witches by Lauren Myracle, Bras & Broomsticks by Sarah Mlynowski, or Twilight by Stephanie Meyer, investigate Jennifer Lynn Barnes's new book, GOLDEN.

Jennifer is on the Girlfriends Cyber Circuit with me, and she took my teen angst novel quiz and turned out to be Tithe, by Holly Black. Plus she owns superhero trading cards and can explain transmogrification (see Fly Survey, below!)

Here's the idea of GOLDEN:
At Emory High, there are two kinds of people: those who matter, and those who don’t. For newcomer Lissy, understanding the hierarchy of the Goldens vs. the Nons is hard enough, plus her growing Aura Vision is getting harder and harder to hide.
It's becoming clear that Emory High has a few secrets of its own. Around the halls, the term “special powers” goes way beyond one’s ability to attract the opposite sex, and there may be something more evil than the A-crowd lurking in the classrooms....

Sounds fun, doesn't it? Reviews call it "fast-moving" "light and playful" -- "glows with the spot-on insights and pitch-perfect prose of someone whose knowledge of adolescence is absolutely fresh."

Also, Jennifer's only just graduated from college, and has been writing novels since she was grasshopper size. You might really like her blog. Her book after this one is called TATTOO, and if you've ever seen me in person in the spring or summer, you'll know that book is right up my street.

And of course, she took the fly survey! and she is the Sparkly Avenger!

The Fly on the Wall Survey
(all about superheroes, because Fly on the Wall is, too. That, and about a girl who gets turned into a fly in the boys' locker room of her high school)
questions by me, answers by Jennifer Lynn Barnes

1) If you could be a fly on the wall somewhere, anywhere ? where?

Right now, I'd probably pick Tom Cruise's house. I'm really curious as to what
the Tom Cruise/Katie Holmes relationship is really like, and I've always
wondered what it would be like to have grown up in a celebrity home.

2) If you could have one superpower, what?

Transmogrification- the ability to change anything into anything else, just by
waving your hand over it. Think about it- you could turn a dust mite into
diamonds or cotton candy or whatever you most desired. And you could
transmogrify yourself and change your own appearance at will, a la Mystique in
X-men. The possibilities are endless, but at the same time, it's a power that
you activate, and you can therefore just avoid using it when you want to take a
break from being a super hero and just live a normal life.

3) What is your superhero name? Why?

4) Who is your favorite superhero?

Wolverine, from X-men (both the movie and the original Marvel version)- I really
dig the claws, and the fact that he traditionally has a soft spot for mutant
teens, like Rogue (in the movie) or Jubilee and Kitty in the comic.

Even though I've never met her, I'd probably pick my dad's mother. She died
before I was born, but in addition to adopting my dad and his brother and being
an absolutely incredible mother to them, she also managed to overcome some
pretty tough times- she had to drop out of school after elementary to take care
of several younger brothers and sisters, and that was just the beginning.

6) Recommend us a superhero movie.

I'd probably go with X-men 2- the perfect mix of character development, humor,
and plenty of awesome special effects.

I'd love to be a cheetah. The idea of being able to run that fast and be that
strong is very tempting to me. Plus, I'm not exactly an aggressive personality
type, and I think it would be interesting to be a predator, rather than prey.

I have an older brother and grew up reading comic books- we have some
collections in our house, like "The Greatest (fill in the blank with the name
of a superhero) Stories Ever Told"- so I've read some of the original Superman,
Spiderman, The Flash, and a few others. My brother and I were also really into
X-men growing up- I actually still have some of the trading cards.

I've always been fascinated by stories that operate on the level of the
fantastical/supernatural, and also on the level of character and everyday life,
and comic books tend towards those kind of stories.

Teen People is folding. Learned it from MediaBistro.

A lovely review of Fly on the Wall from Reading YA: Readers Response, a website I just discovered.

I quote:
"There aren't too many books where I'm both giggling and briefly grossed out and close to tears all at once. E. Lockhart has really nailed it, and I can't wait to read the rest of her stuff."

Posted at 06:50 AM in Book Publishing News | Permalink

You scored as Cyclops.
Cyclops is the team leader of the X-Men, and a skilled one at that. He loves Jean Grey very much. He's a strict and sometimes uptight leader, but he believes in his cause and he knows what he's fighting for... Peace between Mutants and Humans. Powers: Optic blasts

I got this from Libraniac.

Posted at 05:48 AM in Fun Stuff: Surveys, Quizzes and other Ridiculousness, Gretchen Yee Stuff | Permalink

Gretchen Yee (heroine of Fly on the Wall), draws comic books. Superheroes, mainly. So she wouldn't need this. Still, as a neophyte artist, I am glad for instructions on how to draw the pigeon. Yay, Mo!

Snagged from Bookshelves of Doom.

After a day spent writing
(I am not saying much about this new one except that it is HARD TO WRITE and has a strange vocabulary)
and then doing unpleasant domestic chores
and having basically no fun at all
(like the funnest bit was eating some yogurt with honey, I am totally serious)
I sit down at the computer to relax and waste a little time, and
lookie what I found!

Superman Haiku.
Each one, a gem, if you love superheroes.
Thank you, Bookshelves of Doom! 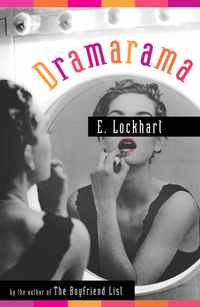 "Hilarious, memorable, and utterly fabulous, DRAMARAMA is E. Lockhart's best book yet."
-- John Green, Printz-winning author of Looking for Alaska and An Abundance of Katherines

Two theater-mad, self-invented, fabulositon Ohio teenagers.
One boy, one girl.
One gay, one straight.
One black, one white.
And SUMMER DRAMA CAMP.
It's a season of hormones,
gold lame,
hissy fits,
jazz hands,
song and dance,
true love,
and unitards
that will determine their future
--and test their friendship.
That's my Spring 07 novel, and I'm so excited about it. It's called Dramarama.

And here is the cover! Woohoo!

Dramarama isn't out until May 2006, but this post is for BOOKSELLERS and LIBRARIANS who might well have an advanced reader's copy by now. All the songs from Dramarama are here, on an iMix.

You click on the link above and iTunes will open straight to the mix. Listen before you read Dramarama to make sure you get every little musical reference. Listen afterwards to get a sense of Sadye and Demi's musical world. (No iTunes? click here for the straight-up songlist.)

In any case, these are some of my favorite showtunes of all time. Songs from Rent, Wicked, Guys & Dolls, Cabaret, Chicago, Bye Bye Birdie, Oliver!, Dirty Rotten Scoundrels, Jersey Boys, Grease, Fame, Sweet Charity, Little Shop of Horrors, and more.

"All of us have bigness within, waiting to burst forth. But if you don't know when -- or if -- that bigness is going to happen, it can be crazy-making. (Especially if you're on the dramatic side to begin with!) DRAMARAMA perfectly captures the rush of working hard and playing hard, screwing up and making up, all for the chance to become the biggest and best you can be."
-- Lauren Myracle, author of TTYL, TTFN and Rhymes with Witches